Sign up for the FlippingJunkie blog to stay in the loop and receive quality information and resources about house flipping. The FlippingJunkie Podcast also releases new episodes weekly so you'll be the first to know.

How to Work with Wholesalers: Trust, but Verify

So just in case you didn't already know, I enjoy flying planes in my free time (hence the name, FlipPilot. Get it?) Recently, I was out flying when I came across a situation that made me a little nervous. I was headed to a towered airport to practice my radio calls, being that I usually only fly out of non-towered airfields. On the way there I was in touch with air traffic control from San Antonio International and they were providing me with flight following (basically watching out for me and giving me traffic notices as their workload permits). As their workload permits is what I was thinking about when I noticed that I was flying perpendicular to the departure end of an airport that a lot of military transport planes fly out of. We're talking about huge planes. Usually the C5 Galaxy. This thing is a monster!

I Think We Might Be On A Collision Course

As I was approaching the area south of the field I looked down to see if one of those beasts was taking off. Sure enough. It was hard to miss. Right as I looked it had begun rolling. My eye followed the path that it was about to take and considered the altitude I was at.

Surely ATC was aware of that guy taking off and me being in the way. The radio was silent though. We might be on a collision course here. Why hasn't the traffic controller said anything? There are only a few calls being made by other pilots, so I would figure that his "workload" was permitting.

Those planes are big, but they are also fast. I was about to go ahead and mention my concern to the controller when I heard him make a call to the C5 warning him of my location. He then told me that the C5 would turn before he reached me and that I was higher than the C5 was going to be before he turned. I'm sure I climbed slightly and turned slightly just to add a little more room. Sure enough, I passed clear of him and was higher than he got before he turned. The picture for this post is from the actual moment that I am talking about. That is the C5 circled that made me a little nervous.

Where I Am Going With This

The reason I bring this up is because I trust ATC but at the same time I am going to do my best to verify that what I am told is accurate. I'm also going to not rely on them to warn me of any potential danger. If they fail to or are too busy, it's my butt that is in big trouble. This is exactly how you need to approach other deals that other investors offer you. Trust but verify.

Even if you are an experienced investor, it may seem basic, but please hear me out.

My email inbox usually has several deals from wholesalers each week. I'm not on a lot of wholesalers lists because I tend to want to buy quite a bit cheaper than other investors that they have found. Not going to fault them for that, as that is exactly what I do. I like to buy at the wholesale price and recommend others do the same.

A lot of the deals that come in are obviously being sent to a lot of people, but what I am talking about also pertains to deals that are sent to you from investors you know and trust as well. Always, always verify the numbers they give you. Those after repair values are almost always inflated (or you could call them overly optimistic if you like). If you don't have a way of finding out what the value is, you need to find someone that you can trust that will be independent from the transaction.

Even if they give you a list of comps, you need to verify that those comps are really comparable and, equally important, are not expired (usually more than 6 months old - or sometimes 1-3 months in rapidly changing markets). I've seen comps used that were nothing like the subject property. I guess the only thing similar was that they both had 3 bedrooms and 2 bathrooms.

Beware the square footage prices as well. These are usually given when the subject property is quite a bit larger than the comps. If houses are selling for $100/square foot and the subject property is 3000 sq. ft., you might be told the value is $300,000. But what if all of the comps were under 1500 sq. ft. They usually don't scale like that. Neighborhoods usually "top out" at a certain value and so this one might not be able to sell for more than $200k.

In the past I would not waste my time with new investors getting started as wholesalers. I'd always thought that they were just calling investors to feel like they were doing something, when they should have been looking for deals. My thinking on this has changed and I am glad that it has.

This is how I now work with newer wholesalers. I offer to give them something. Something that is truly needed when you are starting out- This blog! No, just kidding. What I give them is an offer to help them analyze their leads. When they come across what appears to be a deal (it's important to not be analyzing leads that are nowhere near a deal - so some ground rules do need to be set), I will help them by analyzing the deal and tell them what I would pay for it. They can then tack on their wholesale fee and make an offer. That way they know they have a buyer lined up and ready to go. It takes out the risk for them and shows them the ropes. They will continue to send you deals out of reciprocity. Not forever, but hey, even one deal is usually worth the time and effort.

This is akin to working with REO Agents. Your best bet to get the deals is to pay more than anyone else. Seriously. I don't do it, but that is the best way.

The second best way is to build a great relationship with them. Talk to them often and take them to lunch...often. Don't just call them up and take them to lunch once and think that is going to make them beg to you to buy their houses. It's like that one time that I went to the gym and I've been buff ever since. It just doesn't work that way. A true relationship needs to be built and that takes time. Be patient and really spend the time necessary to have them want to throw you a bone here and there.

This works on me. My "go to" guys (people that I sell good leads to) often take me to lunch and though I might be able to find other people to pay more for some of the deals, I don't usually bother.

So keep that in mind for another possible marketing method to find more deals. You might discover a source that continually sends you good deals. It's nice when other people are doing the marketing for you.

As always, thanks for visiting the blog! 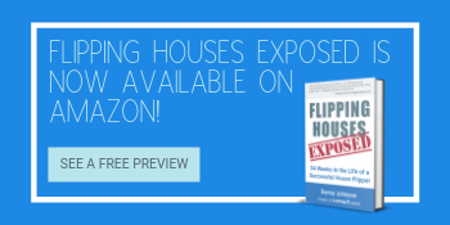 Patience is the Greatest Virtue

27 Lessons Learned After Flipping Houses For Over 10 Years

Intimidation Is A Deal Killer - Tips To Close More Deals